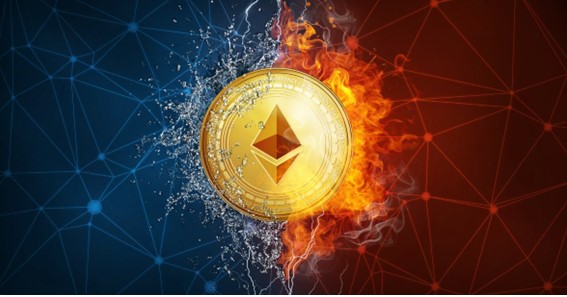 Ethereum, the second-most popular blockchain platform in the world after Bitcoin, seeks to be everything that its forerunner is not. Ethereum is being constrained by some of the shortcomings of Bitcoin, including the latter’s dependence on the proof-of-work consensus mechanism and a general lack of scalability. Through a series of infrastructure changes, Ethereum’s multi-phased upgrade, which includes the Beacon Chain, Merge Chain, and Shard Chains, seeks to increase the network’s scalability and security. The change from a proof-of-work consensus mechanism to a proof-of-stake model, both of which provide many protocol changes, is the most significant.

Buterin, the founder of Ethereum, and his team have proposed a network update termed Ethereum 2.0, or Eth2, to address Ethereum’s scalability issues. Although its implementation will take time, Ethereum 2.0 introduces fundamental changes to the way Ethereum functions. In an effort to make Ethereum quicker, safer, and more widely available than ever before, engineers have been working nonstop since 2020 to update the network.

If your business is using Ethereum to develop any secure digital technology or offer decentralized services, they can take the help of an Ethereum development company to carry out this transition smoothly and update their services/solutions accordingly.

A proof-of-stake consensus algorithm will be used on the upgraded Ethereum 2.0 blockchain to verify transactions via staking. The mechanism of staking will take the place of the proof of work methodology, which requires cryptocurrency miners to employ high-powered machines to complete complex mathematical calculations known as hashes. Prior to being published to the public network, Ethereum transactions are validated by miners, a process that consumes more and more electricity. Systems that rely on proof of work use lots of energy. One of the main issues with Ethereum is its high carbon footprint, but the combination is expected to reduce it by up to 99.95%.

What Differs Ethereum from Ethereum 2.0?

Transactions must be verified in a decentralized manner using blockchains like Ethereum. Ethereum currently employs a proof-of-work consensus algorithm, much as other cryptocurrencies like Bitcoin. Whereas, proof of stake allows ordinary users to stake a network’s native coin and become validators rather than depending on miners. Similar to miners, validators check transactions to make sure no fraudulent ones are being processed by the network.

When will Ethereum 2.0 occur?

Ethereum 2.0 is being released in stages, the Beacon Chain, the first update, came online in December 2020. Native staking, a crucial component of the network’s transition to a proof-of-stake consensus process, is introduced to the Ethereum blockchain via The Beacon Chain. It is a different blockchain from the Ethereum main net, as the name implies.

The Beacon Chain and the Ethereum main net will be combined in the second phase, dubbed “the Merge,” which is anticipated to happen in the third quarter of 2022. Shard chains, the last stage, will be crucial to expanding the Ethereum network. Shard networks distribute these activities among 64 new chains rather than resolving all transactions on a single blockchain. Additionally, since considerably less data would need to be kept on a particular system, running an Ethereum node will become much simpler from a hardware viewpoint. The Ethereum Foundation predicts that by 2023, Ethereum 2.0 will be fully implemented.

The blockchain used by Ethereum today is made up of a single chain of sequential blocks. Although it is safe, this is very sluggish and ineffective. With the addition of shard chains, this blockchain is divided, allowing transactions to be processed in parallel chains rather than sequential ones. The network becomes faster and is scalable.