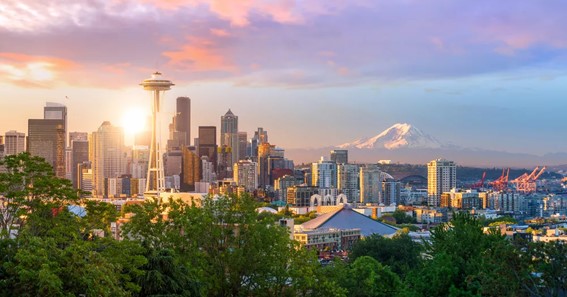 Seattle is a city in the state of Washington that has a lot of reasons why you should live there. It boasts excellent neighborhoods, a plethora of career prospects, educational institutes, areas for hiking and other activities to suit your adventurous spirit, and lovely weather all year. Before moving to any place, it’s essential to know about the place from the aspect of culture, neighborhood, cuisines, etc. So, if you’re thinking about moving to Seattle, here are 10 things you should know before you go.

1. Neighborhood and cost of living

Seattle is presently ranked as the 19th greatest city in the United States. It’s also a moderately safe place to live in Washington state. However, the cost of living in Seattle is comparatively higher than in most cities. An average one-bedroom apartment on rent in Seattle would cost you around $2500 plus other expenses like food, medical, transportation, etc. It’s advisable to consider all of these expenses and plan your budget well in advance. In comparison with New York City, Seattle is cheaper in terms of rentals.

Another important perk of moving to Seattle is that there are no personal taxes in Washington state. Although, residents are supposed to pay property taxes and sales taxes. Sales taxes in Seattle, Washington, are considered the highest in the country. However, all types of income, such as social securities and pensions, are absolutely tax-free.

3. Exhausting traffic and the public transportation

Being a metropolitan city, Seattle is negatively famous for its bad traffic. It has ranked 6th worst traffic city in the USA. If you’re traveling in your own vehicle, make sure you have a buffer time while scheduling. Streets are busier at the time of weekends. Public transport in Seattle is much better than in most cities. Seattle is equipped with 2 public transportation agencies: King County Metro, which runs local and commuter buses inside King County, and Sound Transit, which runs commuter rail, light rail, and regional express buses across the broader Puget Sound area.

Before finding a room for rent in Seattle, knowing about the weather of the place is important. In the fall and winter, Seattle receives a lot of rain, and sometimes in the spring too. Seattle receives more rainfall than New York City and Miami. It is considered the rainiest city in Washington. Seattle receives steady rainfall during winters. The duration of winters in Seattle is roughly between December and February. Winters are pretty cold, and temperatures are observed to be going down below the average. On the other hand, summers are dry and more pleasant.

Seattle can be considered an educational hub of Washington. Most of the universities in the state are located here in Seattle. Additionally, you can find many small and mediocre high schools and colleges in the city. This makes Seattle the best pick to move to with the family. Great universities like Seattle University, North Seattle College, Seattle Pacific University, and Seattle Central College are located in the city, and students from all over the world migrate here for their higher education.

There are many Multinational companies based in Seattle. Companies like Amazon, Starbucks, Costco Wholesale, Barrett Business Services, Microsoft, and so on have their headquarters located in Seattle. Finding a job here in Seattle isn’t too difficult as you can find various world-class employers here. Many MNCs provide quarters to their employees that can ultimately help you with your plans of moving here.

Seattle is known for its coffee culture. The first Starbucks was in Seattle. Hence it is considered the world center of coffee. You can find numerous coffee houses around the city with many coffee enthusiasts sipping their coffees. Seattle is infamous as the coffee capital of America.

Seattle is now considered a city of tech. However, in earlier times, it had its roots in the performing arts and music. Aside from being the birthplace of grunge rock, Seattle is also home to the Seattle Symphony Orchestra, one of the world’s most recorded orchestras, and the prestigious Pacific Northwest Ballet and the Seattle Opera. In terms of popular music, Seattle gave birth to Jimi Hendrix, Nirvana, Pearl Jam, and Kenny G. There are a number of museums, art galleries, and theaters. Seattle is a paradise for an art enthusiast.

Seattle has just gained the second position on the list of the nation’s top tech towns, trailing only San Francisco, and each year, more and more tech businesses relocate to Seattle. While Seattle’s own IT powerhouses (such as Amazon, Microsoft, and Boeing) currently employ over 160,000 residents, newcomers to the region include Google, Adobe, Dropbox, Apple, Facebook, and Snapchat. Seattle is brimming with changes in the tech industry, so migrating to Seattle may be the finest professional move you’ve ever made.

You can conveniently spend your free time here on so many activities. There are plenty of art galleries and theaters for people interested in art, music, and performing arts. Seattle is settled on the hills; hence there are lots of hiking activities available for adventurers. Mount Rainier, the tallest peak in Washington, is just 60 miles away from downtown Seattle. You may pick a guide, tie your shoes and go hiking. Also, there are plenty of water sports around the city.

Seattle is the most diverse city in Washington and developed in and out. It serves best to every type of individual. Although finding a room for rent in Seattle could be hectic due to high rates, sharing a room with someone can help cut down expenses. Finding roommates in Seattle could be quite a necessity in these circumstances.

Seattle is rich in educational facilities as well, as it is a homeland to so many multinational companies and brands. Numerous students and job professionals migrate here and find roommates in Seattle to share the apartment with and, therefore, the expenses. It is most important to plan the budget and a suitable neighborhood beforehand to avoid any mishaps in the new city.

To Know Some Great Stuff Do Visit WhatIsMeaningOf

To Know Some Great Stuff Do Visit WhatIsss